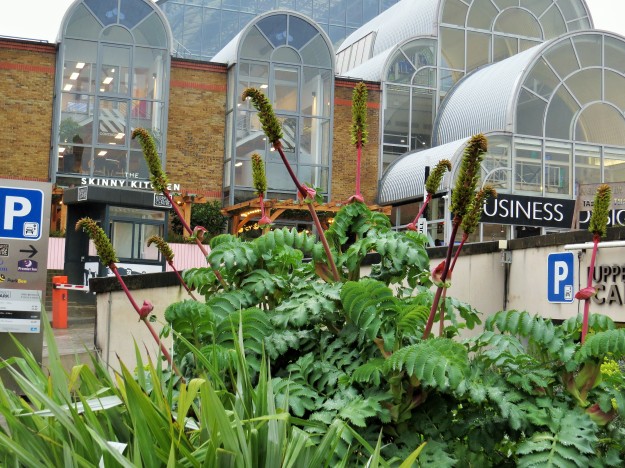 Dear Readers, I am being completely self-indulgent this week. I was so taken by this plant when I walked past it at the Business Design Centre in Islington that I had to find out some more about it. I have never seen anything quite like it: look at those flowers, which remind me of feather dusters or possibly one of the late Ken Dodd’s tickling sticks.

Giant Honeyplant comes originally from South Africa (home to so many interesting plants) where it is known as kruidjie-roer-my-nie (herb touch me not) in Afrikaans. It is a member of the Francoaceae family, a wholly new family to me – another member of the group are the Bridal Wreathes from Chile, which are also splendid plants but are clearly not quite as extravagant as our Wednesday Weed. 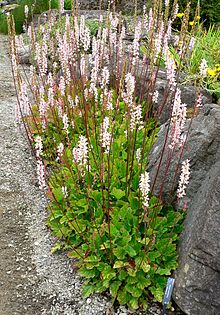 Now, our plant looks fairly inoffensive sitting outside the Business Design Centre, but in South Africa it is apparently also known as ‘Smellyanthus’, for the  distinctive musky odour of the flowers. However, the crushed leaves are also said to have the perfume of salted peanut butter, which is surely a good thing? South African readers, help me out here! At least the plant doesn’t smell of liquorice which would be the end of the story as far as I’m concerned. I suspect that the cold, wet, windy weather that we’ve been having doesn’t encourage any odours, pleasant or otherwise, to reveal themselves to my poor cold nose. I shall have to have another sniff when/if summer comes.

In the UK, the plant is usually grown for its rather beautiful foliage: popular TV gardener Monty Don says that he has had a specimen for many years that has never flowered, so I don’t know how ‘my’ plants have been persuaded into bloom (probably by being raised in a greenhouse I imagine). They need lots of water but also free-draining soil (so no chance for me then), and are said to not be frost-hardy. Mr Don recommends cutting the plant back hard in early spring rather than trying to nurse them through the winter, and says that new shoots will pop up like magic.

In South Africa the bright red flowers are bird-pollinated, as so many blooms of this kind are. Sun birds are particularly fond of the copious nectar, and a female or juvenile bird is pictured below getting stuck in.

I cannot resist showing you what the male looks like too.

For all this musky honey and peanut butter, however, giant honey flower is poisonous: it contains bufadienolides, named for the Bufo genus of toads (which includes our European toad, Bufo bufo). The skin of toads exudes a toxic slime which means that animals that pick up one of the amphibians in the hope of a quick meal often back off, foaming at the mouth and clawing at their jaws. The chemical in giant honey flower acts directly on the heart, causing tachycardia, or fibrillation, or a lethal heart attack. Goodness. As if this wasn’t enough, it also contains cardiac glycosides, which are also found in foxgloves (hence digitalis) and lily-of-the-valley.

However, the black nectar that is fed on by sunbirds is also feasted on by bees, and the Plants Africa website mentions that it makes good honey. The plant has also been used extensively in African traditional medicine, for abscesses and boils, sore throats and backache, painful feet and aching joints. It is also considered a cure for snake bite. Being toxic presumably means that the plant has a lot of active chemical compounds, and maybe local people have learned to harness the power of the plant. Anyone without such skills should be definitely be wary.

And finally, a poem. This is by Sean Borodale, a poet that I haven’t come across before, but I really like his work: this poem is from Bee Journal, a year in the life of an apiarist. . When I read about this honey, I think of the black nectar oozing from the flowers of Melianthus major. Although from a sunnier place, I wonder if it, too, would have a feral tang.

To be honest, this is dark stuff; mud, tang
of bitter battery-tasting honey. The woods are in it.

ivy, sweat, testosterone, the blood of mites. Something
human
in this flavour surely.

Had all the clamber, twist and grip
of light-starved roots, and beetle borehole dust.

Do not think this unkind, the effect is slow
and salty in the mouth. A body’s widow in her dying
year.

It is bleak with taste and like meat, gamey.

This is the offal of the flowers’ nectar.
The sleep of ancient insects runs on this.

Giant’s Causeway hexagons we smeared on buttered toast
or just the pellets gouged straight from wax to mouth.

Try this addiction:
compounds of starched-cold, lichen-grey light. What else seeps
out?

Much work, one bee, ten thousand flowers a day,
to make three teaspoons-worth of this
disconcerting
solid broth
of forest flora full of fox. Immune to wood shade now.