I do love an exhibition that centres on the natural world, and way that artists have responded to it. ‘Among the Trees’, which just opened at the Hayward Gallery on London’s Southbank, aims to ‘bring together artworks that ask us to think about trees and forests in different ways’. I found the show a bit of a jumble of ideas, trying to cram a bit too much into a few small spaces, but there is some great stuff here, and lots of food for thought.Take Eva Jospin’s ‘Foret Palatine’ for example. The sculpture takes up an entire wall, and looks like a forest from a (rather Grimm) fairy tale. What makes it fascinating is that it is made entirely from cardboard – trees made out of trees. Few things here are exactly what they seem.

I love sculpture, and there are several interesting examples here. ‘Cold Moon’, by Ugo Rodinone, is one of a series of twelve casts of ancient trees, between 1500 and 2000 years old. This particular cast is from an olive tree, twisted and contorted by years of sun, wind and water. It’s beautiful in the way that an elderly person’s face is beautiful, shaped by the experiences of their lives.

This work is called ‘Plastic Tree II’, by Pascale Marthine Tayou, from Cameroon. The artist likes to work with the juxtaposition of natural and man-made materials, and between the living and the artificial. This is a bright and happy piece, but like several pieces here, it feels as if it misses the mark a bit – surely something so dangerous as single-use plastic shouldn’t be so joyful? Or maybe I’m just being a curmudgeon. It has been known.

I rather liked the piece below, however. It’s by the German artist Mariele Neudecker, and it’s called ‘And Then the World Changed Colour: Breathing Yellow’. The sculpture is in a tank, underwater – close up, you can see the bubbles appearing along the branches. It is lit with an unearthly queasy yellow-green light, and I felt as if I was being invited in, but that the invitation would not necessarily be to my advantage. This was something that I could have looked at for a long time. There is a sense of the ‘drowned world’ about it that seems appropriate considering the way that it doesn’t seem to have stopped raining since about October.

There are lots of paintings too, old school though they are. Here is a piece by American artist Kirsten Everberg called ‘White Birch Grove, South (After Tarkovsky). The piece was inspired by Tarkovsky’s film ‘Ivan’s Childhood’, in which the birch forest is a place of both enchantment and entrapment for young Ivan. I found the painting claustrophobic, and the longer I looked, the more human faces and eyes I was able to see. The trees feel like soldiers, or lost spirits.

The natural resilience of trees was illustrated in a series of photos taken by Zoe Leonard, of trees in New York City. The bark of these trees is growing through and around the fences that confine them, absorbing and covering the barbed wire and the mesh. The result is a scar, but an honourable one. 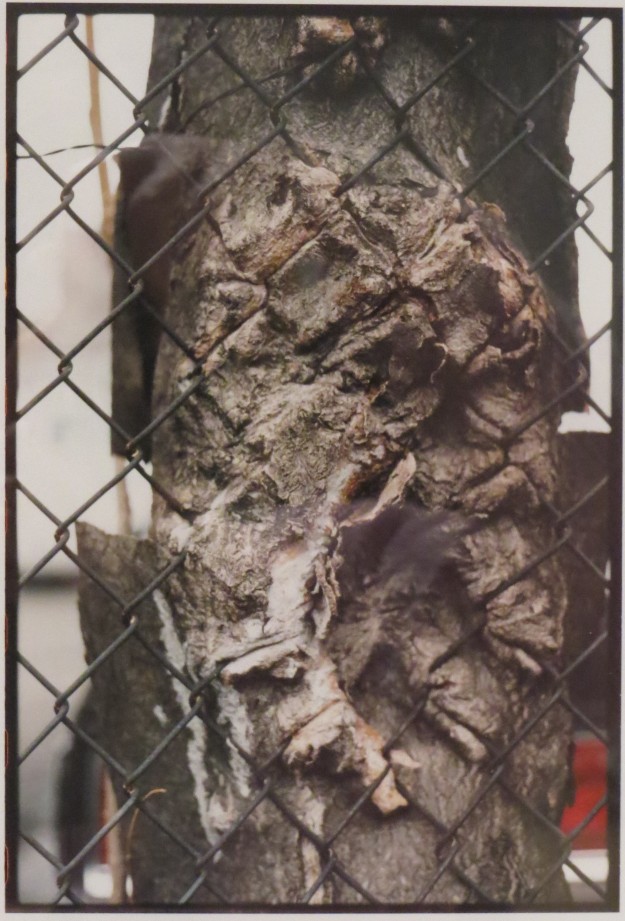 In another photograph by Rachel Sussman (who has a series of photos of ancient trees in the exhibition) we see an old friend: the Jomon Sugi, a Japanese Cedar estimated to be between 2000 and 7200 years old. It is interesting to see the twisted thorny twig fence, probably intended to protect the tree from the inevitable souvenir hunters.

I really liked these two paintings as well. What appears at first to be a simple depiction of a rainforest scene becomes, on closer study, an incredibly detailed depiction of the ecosystem. The artist, Abel Rodriguez, is an elder of the Nonuya people, who live on the Cahuinairi river in the Colombian Amazon.  He learned everything he knows about plants and animals from his uncle, and taught himself to draw. In the 1990’s, he and his family had to leave the region due to armed conflict, but he has continued to make images of his forest home, showing the landscape in different conditions and at different times of year. 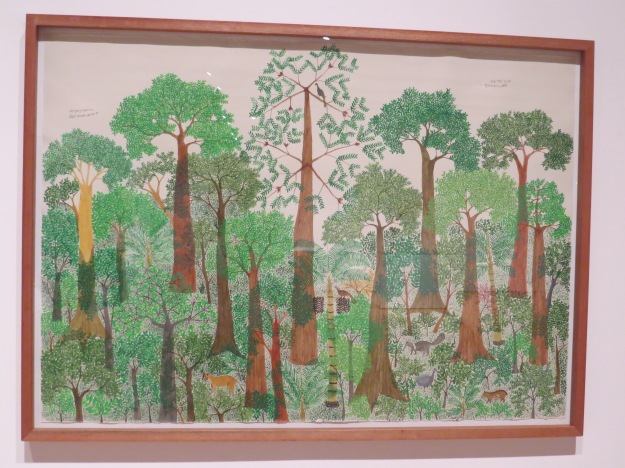 There were also two video installations. I was intrigued by Jennifer Steinkamp’s animated trees, which sway and grow and drop their leaves in spite of being made of nothing but pixels. A whole year is compressed into three minutes, but this feels a bit like the way we’re going – artificiality and speed seem to be everything.

The exhibit that I enjoyed most, though, was the giant horizontal spruce tree depicted by Eija-Liisa Ahtila’s Horizontal-Vaakasuora. This is a real tree, and the soundtrack is full of the sounds of the wind and the chirping of birds. The decision by Ahtila to show the tree on its side was a practical one: few venues would have a room high enough to show the tree vertically. Cutting it into sections means that the tree sways in different directions and at different rates, meaning that every time you think you are watching something ‘real’, there is a disconnect and it becomes clear that you are not.

So, ‘Among the Trees’ is well worth a look, even though it is a bit of a jumble. Some have commented that it doesn’t say enough about the relationship between trees and human beings, and how that relationship has lost its way. Others have said that the exhibition feels ‘scattergun‘. For me, it feels as if someone has said ‘let’s put together a lot of varied and interesting work about trees’ without any overweening view of what those works should say. It sometimes feels as if the exhibits are shouting at one another across the gallery, but there is much to enjoy here. I could sit and watch the horizontal tree for half an hour and feel better at the end of it, for one thing.

‘Among the Trees‘ is at the Hayward Gallery until 17th May.

7 thoughts on “Among the Trees at the Hayward Gallery”