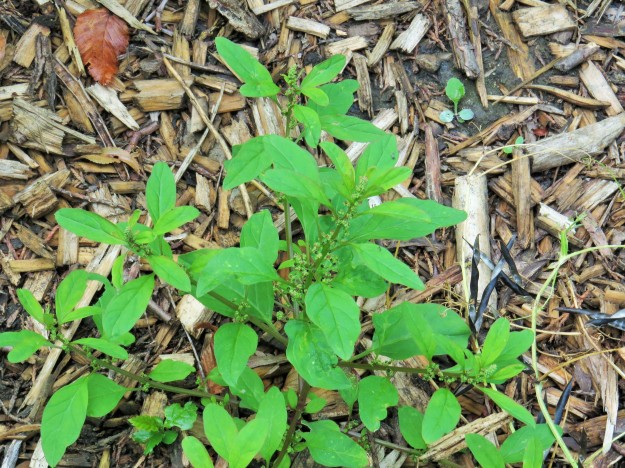 Dear Readers, some plants are so sprawling, so non-descript and so lacking in flamboyant features that we are apt to pass them by. No plants are more like this than the members of the Amaranthaceae or goosefoot family. Their flowers are collections of tiny white or red blooms held together in clusters, their leaves often look decidedly goose-footish (though not in the case of this species) and you would pass them by as yet another ‘weed’.

However, a member of the goosefoot family has recently become much more famous, and is being grown in various places in the UK. Quinoa (Chenopodium quinoa) is a South American plant prized for the high nutritional value of its seeds, although the Western appetite for this product was causing severe problems in Peru and other areas where it is a staple for the local population. Some pioneering companies, such as Hodmedods, decided to experiment with growing the grain in this country, along with some of our native bean species which had previously gone out of fashion. It’s also good to remember that in times gone by we ate many members of the goosefoot family ourselves, with Good King Henry (Chenopodium bonus-henricus) and Fat Hen (Chenopodium album) both providing us with grain and leaves.

Many-Seeded Goosefoot is originally native to mainland Europe and Asia, but is considered an archaeophyte in the UK ( a plant that arrived earlier than 1500). Why 1500? Because after this point, the Voyages of Discovery to the New World resulted in a flood of new plant species to the UK, carried in ballast, in shipments of new exotic crops, and in cloth. It was a somewhat arbitrary line, but humans do love to categorise things as we know. Plants that arrived after this date are known as Neophytes. The whole subject of plant arrivals to the UK is a fascinating one: in ‘Alien Plants’, Stace and Crawley point out that many goosefoot species originally survived because they had such a close resemblance to the crop plant that was actually wanted. The Chenopodium species look very similar to sugar beet, for example, especially when they are young, and so they often survived. Many-Seeded Goosefoot is widely naturalised, in particular in North America where it probably arrived with the crops brought by the original settlers. It has been our companion for a very long time.

Many-Seeded Goosefoot is a specialist of heavy, clay soils, and particularly likes ponds that are drying out – it is a real opportunist, and those ‘many seeds’ no doubt help. Goosefoots in general have the highest tolerance for nitrogen of any ‘weed’,  and often appear on dung-heaps or as arable weeds. Other members of the family, such as the sea-beet and the glassworts, are seaside specialists, taking joy in salt marshes and the strand line. It has not escaped my notice that there is a stand of spear-leaved orache close to the tennis courts in Cherry Tree Wood, where dogs regularly pee.

What seems to be distinctive about this species of goosefoot (though I have to be careful because it hybridises easily) are the blackish seeds, and the particularly sprawling habit. Most other goosefoots are more upright, but many-seeded goosefoot seems to take every opportunity for a lie-down, and I can hardly blame it after the heatwave we’ve had. Also, note the rather pretty pink stems.

There are many recipes using goosefoot  species – both the young leaves as a spinach substitute and, occasionally, the seeds. Most of these use Fat Hen (Chenopodium album), but I see no reason why you couldn’t use Many-Seeded Goosefoot if that’s all that you have. You can get some idea of the possibilities here. Fat Hen is still grown as a food crop in India, and there are many delicious recipes for dal, raita and other spicy delights on the interwebs – this one, for daal, is just a sample.

Medicinally, the goosefoot species are often used as an emollient, and are made into poultices for boils, abscesses and wounds (hence one of its alternative names ‘Smearwort’). The plant is high in oxalic acid so should be avoided by folk with kidney complaints or gout.

And so, dear readers, before we leave this ‘ordinary’ plant, I am glad to share a couple of poems with you. First, this one.

And then this one, by Russian poet Sergey Alaxandrovich Yesenin, who died in 1925, and was famous for his poems about love and the simple life. This one is mysterious and rather lovely, I thought.

I’ll no more go roaming, no more seeking,
No more crushing goosefoot in the wood.
With those oatsheaf locks you tossed when speaking
You have vanished from my dreams for good.

With red berry juice on fair skin glowing,
Beautiful and gentle, you were like
Pink skies when the sun to rest is going
And, like new snow, you were sparkling bright.

Now the seed grain of your eyes has scattered, shrivelled,
Your rare name has melted like a sound,
Though the scent of blameless hands still lingers,
In the folds of a creased shawl is found.

In the still hour when the early sunrise
On the rooftop licks her kitten nose
I hear gentle comment on you coming
From the wind that sings in honeycombs.

What if blue dusk on occasion soulfully
Whisper that you were a song, a dream –
He who shaped your supple figure and smooth shoulders
Truly kissed a mystery supreme.

I’ll no more go roaming, no more seeking,
No more crushing goosefoot in the wood.
With those oatsheaf locks you tossed when speaking
You have vanished from my dreams for good.